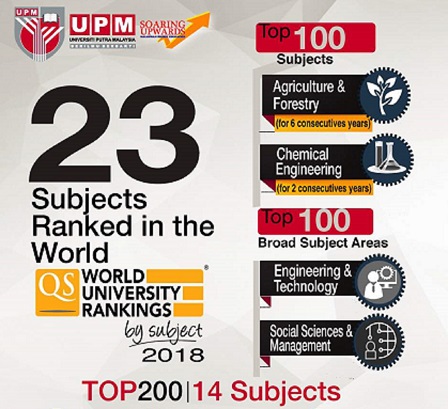 SERDANG -  A total of 14 subjects from Universiti Putra Malaysia (UPM) were ranked among the best 200 in QS World University Rankings by Subject 2018 as announced recently on February 28.

UPM retained its position in the worlds’s best 100 for six consecutive years, in both Agriculture and Forestry subjects.

For the second year in a row, Chemical Engineering also succeeded in maintaining its spot in the world’s best 100.

In addition, 23 other subjects also made the cut to be listed in the world’s top 400.

UPM managed to improve its ranking when listed among the world’s best 100 universities in two broad subject areas which are Engineering & Technology and Social Sciences & Management.

UPM Vice Chancellor, Prof. Datin Paduka Dato’ Dr. Aini Ideris congratulated both the staff and students who had contributed to the success of the subjects.

“The effort to maintain ranking as the world’s best 100 subjects for six consecutive years for Agriculture and Forestry subjects, and for the second year in a row for Chemical Engineering subject is truly an impressive achievement for UPM especially with the stiff competition by other institutions in the region.

“All of the subjects accomplishments prove that UPM has succeeded in developing an international reputation for academic standards and quality of graduates,” she said.

Prof. Aini said that among the ranking criteria were the strong profiling of academicians, high-impact research, expansion and outreaching to the community and employers’ recognitions of graduates around the world.

“The improved performance of the faculties and institutes in UPM in the aspects of teaching, research, publication and national and international networks also helped with the ranking,” she added.

More information on the result of QS World University Ranking 2018 is available at https://www.topuniversities.com/subject-rankings/2018.