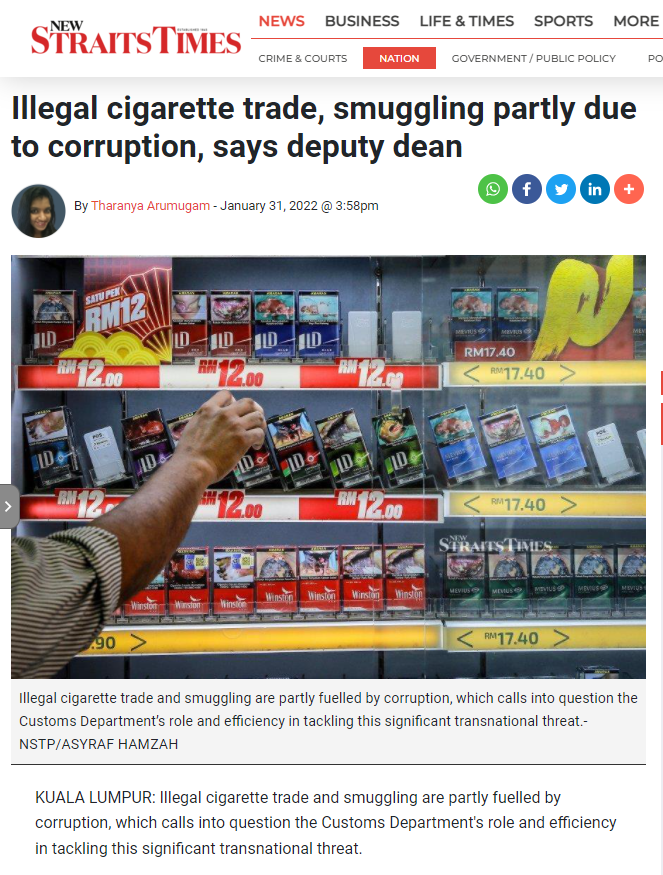 KUALA LUMPUR: Illegal cigarette trade and smuggling are partly fuelled by corruption, which calls into question the Customs Department's role and efficiency in tackling this significant transnational threat.

Universiti Putra Malaysia's School of Business and Economics deputy dean Associate Professor Dr Norashidah Mohamed Nor said this when commenting on remarks made by certain quarters that Malaysia's tobacco end game quest would give rise to uncontrolled illicit cigarette sales in the country.

She stressed that the problem of illegal cigarettes should not be associated with the end game, as the problem lies solely with enforcement on the ground and at the country's borders, which primarily falls under the Customs Department's jurisdiction.

"There is no connection between illegal cigarettes and end game.

"The issue surrounding illicit cigarette trade has long been employed (as a strategy to thwart the government's anti-smoking efforts) since the increase in cigarette excise tax in 2015, where tobacco lobbyists claim that high prices drive smokers to illicit cigarettes.

"Among the allegations made by certain parties were that the price hike of legal cigarettes due to excise tax was the main reason why 60 per cent of the cigarette market in Malaysia is dominated by illicit cigarettes.

"Now that the government is working towards implementing a 'generational end game', they (tobacco lobbyists) are harping on the same argument despite the absence of scientific evidence to prove their claim," she told the New Straits Times.

Norashidah, who is a health economist, said the allegations of a link between illegal cigarettes and hike in cigarette excise tax had been refuted by several studies conducted both internationally and domestically.

Nevertheless, tobacco lobbyists remained persistent and adamant in their pursuit to prove the matter as otherwise.

She further said it was surprising that the issue of illegal cigarettes was not highlighted when cigarette companies themselves raise the price of cigarettes (and not because of excise tax).

"A study conducted by researchers from UPM and Tunku Abdul Rahman University College (TARUC) in 2020 has proven that the illegal cigarette sales in Malaysia is partly due to the issue of corruption, rather than the effect of taxes.

"It has been six years since we last imposed an excise tax on cigarettes, but we are still at war with illicit cigarettes. Where is the Royal Malaysian Customs Department in this issue?

"Should we put the future generation and their health at risk by not implementing the required control measures just because of the failure of certain parties in addressing this problem?

"Do we have to bow to the baseless allegations of the industry that only knows how to profit from the weaknesses of our system?"

Norashidah said the implementation of the generational end game was a crucial effort requiring support from all parties.

There is no logical connection between this implementation and the issue of illegal cigarettes, she stressed.

"But the problem of illegal cigarettes needs to be addressed simultaneously with the implementation of this end game," she added.

Health Minister Khairy Jamaluddin had, on Thursday, said Malaysia hoped to pass legislation this year that would outlaw the sale of tobacco and other smoking products to anyone born after 2005.

Khairy had also talked about a "generational endgame" earlier, stating that there would come a time when the coming generation "will no longer know what a cigarette is".

Experts who spoke to the NST said the "generational endgame" forms part of the country's strategy to be a tobacco-free nation by 2040, when smoking prevalence is projected to be less than five per cent.

products, denormalising smoking culture and promoting zero exposure of tobacco use to children.

However, they had said that the ministry's bold vision required decisive and strategic action, which included a clear roadmap for the generational ban on cigarette sales, political willpower to mitigate TI interference, and passage of the Tobacco and Smoking Control Act.